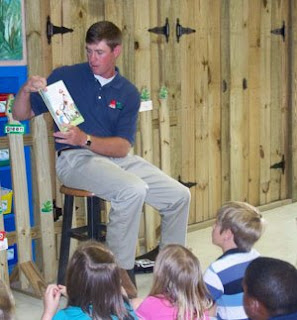 This past Friday I had the opportunity to read "Oh Say Can You Seed" to the first graders at Vernon Elementary. The original plan was just to read to my wife's class, but as she told the other teachers about it they wanted in on the deal. I was happy to oblige.
I'll have to admit, having 90 six-year-olds sitting in the floor looking up at you can be a little unnerving because you don't exactly know what to expect. But the kids were very attentive and interested in the book and asked several good questions about my farm afterwards.

I don't think I could stress enough how important it is to directly engage the public, especially kids, about agriculture. With so few having a direct connection to the day-in, day-out activities on the farm, it's no surprise that so many people are falling prey to the misinformation and dangerous ideology touted by groups and individuals who want modern agriculture to fail. And even though most of my "advocate" hours and activities are spent on the internet, nothing can replace the value of telling your story in person. Seeing the kids take a genuine interest in what I was talking about made my week, and I would encourage all farmers to take the time to visit a local classroom. It's a win-win-win-win propostion...for the kids, for the farmer, and for agriculture, and for America.
Posted by Will Gilmer at 8:10:00 PM