Recapping our family trip to Nashville

My wife, kids, and I made our first family trip up to Nashville last week. It wasn't really a vacation in a classic sense (I was there for a conference), but we had a good time over the two and a half days we were in town.
After settling into our downtown hotel room late Thursday afternoon, we made the short walk over to Nissan Stadium to attend Nashville SC's match again Atlanta United. For all the soccer my son and I watch on television, it was our family's first time to attend a professional soccer match. We. Had. A. Blast! NSC had to settle for a 2-2 draw after two of their goals were disallowed, but we had too much fun to care about the result.
Friday's conference agenda called for a morning meeting and evening dinner, leaving us with a free afternoon. We ventured to The Row Kitchen & Pub on Lyle Avenue for lunch where we all ordered the Nashville Hot Chicken. It did not disappoint. From there we made the short drive over to Centennial Park and spent an hour touring the Parthenon. After returning to our hotel, we walked a few blocks to get ice cream and cookies at Mattheessen's.
We enjoyed a late lunch Saturday afternoon at Puckett's Grocery & Restaurant on Church Street. The Country Music Hall of Fame was next on our agenda, and I really enjoyed all the different exhibits that walked you through the origins and evolution of country music. After returning to the hotel room for a nap that we all needed, we finished the day eating supper at a little place in the Germantown district called Jack Brown's Beer & Burger Joint. If you ever find yourself there, you can't go wrong with the Dr. Gonzo burger and sweet potato fries.
One day I'd like to go back to Nashville and take in more of the live music scene with my wife, but I'm thankful for the quality time the four of us spent together this past week.

A hidden cost of rural broadband

Back in January '09, I was creeping down the information superhighway at 28.8kbps before "upgrading" to 1.5Mbps DSL in 2010. Over a decade later, in late April of this year, our local electric cooperative's Freedom Fiber broadband venture finally made it to our farm in all of its 100Mbps glory. And we could get up to a Gig if we needed it.
It is FANTASTIC!
Unfortunately though, we have discovered a hidden cost of having rural broadband on the farm.
Because our fiber network has been installed by our electric co-op, the lines are suspended beneath existing electrical lines rather than buried. That's not really a problem until they run too low across your fields.
A couple of tractors pulling hay equipment confirmed today what our eyes have been telling us for the past several weeks: there are two fiber lines crossing one of our hay fields that aren't high enough for all of our equipment to pass under. Thankfully, the equipment we had in the field today did just clear the lines, but we'll be out of luck if something doesn't change by the time Spring silage harvest rolls around.
The good thing about these lines belonging to our local electrical co-op rather than a big national company is that they'll work with you to solve the problem. I reached out to them this afternoon and have been told a crew will be coming to look at options within the next few days. Hopefully we can find a solution that doesn't involve having a pole sunk in the middle of the field, but we can deal with it if that's what it takes. Losing a few square yards of  hay or silage production around a utility pole is much better than losing a ten-foot swath the whole width of the field due to low hanging lines, and it's a price worth paying if that's what it takes to keep the broadband we've waited so long for.
UPDATE: The problem was fixed (without adding a pole!) less than 24 hours after I reported it. As I mentioned, that’s the benefit of doing business with a local company.
Posted by Will Gilmer at 6:07:00 PM No comments:

I loaded my kids and kayak in the truck after finishing the early morning farm chores Saturday and made the hour-long drive up to Bear Creek Canoe Run outfitters in Hackleburg. We had an 8:30am reservation to rent two kayaks and have them shuttle us to the Mill Creek ramp on Bear Creek near the intersection of state highways 172 and 241. We spent the next four hours paddling and floating down the creek and having a grand old time enjoying both light rapids and smooth, slow moving water. 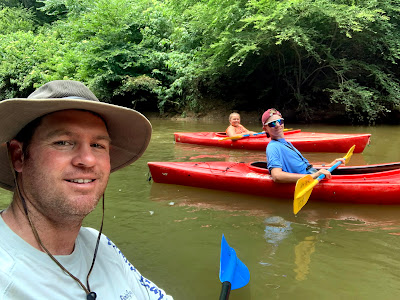 This was my fourth time to float down Bear Creek. The first was in the summer of 2015 when a group from our church went down in canoes. Once was enough for my wife, but my son and I really enjoyed it. The two of us have made it an annual trip each summer since 2019 and included my daughter for the first time this year. She loved it and is already looking forward to the next opportunity to make the run.

If you are looking for a place to canoe or kayak in northwest Alabama, this section of Bear Creek is definitely worth considering. As I said, we put in at Mill Creek and spent four hours on the water until BCCR picked us up at Rock Quarry Branch off of Hwy 172 some 6-7 miles downstream. Most of the rapids are on the first half of the run before Factory Falls (a mandatory portage point), and there are long stretches past the falls that are so calm I nearly dozed off while drifting downstream. The scenery is gorgeous throughout. The creek runs through private property so you can't get out and venture beyond the stream bed, but there are a few small sandbars you can moor against if you need to stretch your legs or jump in for a swim. BCCR is the only rental and shuttle service in the area, but you can DIY the trip if you and your family/friends have your own boats and can self-shuttle. You can get more information about conditions and access points here and here.

What are your favorite spots to kayak, canoe, or float in northwest Alabama? Do you know of good stretches of the Buttahatchee or Luxapalila with good access points in and out? Let me hear from you!