Ten years later: the rest of the story

This morning I found myself in a reflective mood thinking back to mid-July 2008 and one of the most hectic weekends of my life. I blogged about it at the time and recommend you give it a quick look over before proceeding with this post. You can read my original account by following this link.

In the post I linked above, I made a short reference to a meeting I attended on that Saturday. Today, the only reason I remember anything about that weekend is centered on that meeting, why I was there, and how I got there and back without missing a milking shift.

And now, the rest of the story.

I was serving as the chairman of the Alabama Farmers Federation's Young Farmers Committee at the time. My committee's goal that year was to eliminate a couple of old contests and reallocate resources towards new contests and programs we thought would help attract and develop new YF members at the county level. Though we were convinced this was the right move for our program's future, we expected a lot of resistance. These contests, the Miss Alabama Agriculture Pageant and Talent Find, had provided entertainment at county and state annual meetings for years and were considered to be "sacred cows" by many of our members.

Getting our county YF chairmen on board with the proposed change wasn't difficult. Many of them were fed up with these old programs and ready to move in a different direction. The trick was going to be convincing the Federation's Board of Directors and County Presidents that this was in the best long-term interest of our whole organization, not just the Young Farmers program.

After briefing the Board at its June meeting, I was given the green light to address the County Presidents at their conference in July. The Board would weigh their input and then make a final decision later on in the year. The problem was I couldn't attend that July meeting. My father (then our county president) was already registered to attend, and our farm labor situation was such that we could not both be away from the dairy at the same time. Driving down and back in between milking shifts was out of the question since the conference was being held nearly 300 miles away in Point Clear.

About a week before the conference, our Young Farmers director and I began discussing how best to deliver my committee's proposal without me actually being there. I can't remember for sure, but I think we were settling on the idea of him clicking through a PowerPoint while I talked via teleconference. Toward the end of our conversation he asked if there was any way at all I could make the trip down to Point Clear and deliver the presentation in person. I jokingly replied, "Not unless your bosses will sign off on sending the company jet up here to shuttle me back and forth."

About an hour later my YF director called me back and told me his bosses had indeed signed off on it.

So that Saturday I met the plane in Hamilton after the morning milking and flew down to Point Clear (a 45-minute flight versus a five-hour drive). I presented my committee's recommendation and...to my great relief...received near unanimous support from the County Presidents. I was flown back to Hamilton and was milking cows by 1:30pm. The Board officially accepted our recommendation later that Fall and the final Miss Alabama Agriculture Pageant and Talent Find contests were held at our Annual Meeting in December.

In the ten years since, our organization has grown participation in Young Farmers events and developed a deep roster of strong future leaders. And while my committee's efforts in 2008 probably won't be remembered by anyone who wasn't directly involved, I like to think we played a part in paving the way for the good things that were to come. If nothing else, the experience helped prepare me for the leadership roles I've held since. And for that I'll always be grateful.

And now you know...the rest of the story.

Hey, folks! It's been a few months since I've given y'all a farm update, so I figured I'd take a few minutes to get you caught up while I'm waiting on my post-milking coffee to finish brewing.

We're in the midst of another hot, humid Alabama summer. Thankfully, though, we've only had one or two "dry spells" over the last couple of months. Timely rains have kept our corn and hay fields green and growing, and it's looking like we might finish the season with a pretty good crop of each. Our first cutting of hay wasn't that great, but we'll be harvesting for the second time next week or as soon as the forecast says we can string together three days with low rain chances. The second cutting is usually our best, and we could also get a strong third cutting (and a fair fourth) if everything "hits" right. Our earliest planted corn will be ready to chop in 2-3 weeks, and so far it's passing the eyeball test. I won't be sure how the yield and quality compares to last year until we have it in the bunker, but I am optimistic it will turn out pretty good.

On the cow front, we currently have 170 coming through the barn each day. We've been drying off pregnant cows fairly regularly over the last six weeks, and we still have a good many more to send out over the next few months. We will have a handful calve toward the end of the month, and then it will start picking up steadily around mid-August. Milk production is down as it always is this time of year, and likely won't start ticking up until September.

Our long-term prospects for staying in dairy still aren't very good. The price we are paid for our milk has inched up a little bit but we're not expecting any kind of big bump in the foreseeable future. And regardless of price, our regional infrastructure is deteriorating at such a rate it just doesn't seem like staying in is a smart/safe course of action. That said, we are hopeful we can continue on for a couple more years and "milk" as much out of the next positive price cycle as possible. Ultimately, though, it looks like a transition away from dairy will be the most sustainable thing for our family farm.

With that in mind, please keep us and our fellow dairy farm families in your thoughts and prayers in the coming weeks and months. Times are tough, and we're all facing difficult decisions over our farms' futures. While we are hopeful that we can make a strategic farm transition on our own timetable, many are finding themselves with no option but to sell their cows and equipment as soon as possible. It's a sad state of affairs, but we each have to play the cards we've been dealt. 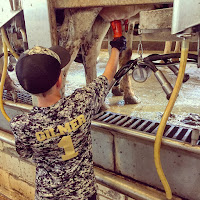 To close this out on a more upbeat note, I want to take just a moment to brag on my son. We told our two farmhands to take a three-day holiday this past week, and LG was really helpful lending a hand in their absence. He's still about a year away from being a full-fledged milk hand, but he can do enough to make a noticeable difference when there's only one adult in the parlor. I'm hopeful that I can provide enough farm work (dairy or otherwise) in the coming years for him and my daughter to earn a few dollars and...more importantly...establish a strong work ethic that will serve them well in whatever career they ultimately choose for themselves.

Thanks for taking a few minutes to read, and have a "dairy" good day!