I'm sure most of you are aware of the severe weather that rolled through the Southeast this past Saturday. The storms spawned tornadoes that claimed several fatalities and did millions of dollars worth of damage.

There were several different "waves" that came across the state, the first being the system that contained the killer tornado that struck Yazoo City and Choctaw County, Mississippi. And much like the tornado that hit Weir and Caledonia in January 2008, we were at the farm watching and listening to weather reports warning us that it was coming right for us.

The storm in 2008 did pass directly over us while we were milking. Once it got about two minutes away from us, we shut off all of our milking equipment and hunkered down in our pit-style parlor. The tornado had picked back up into the clouds, thank goodness, but the driving rain and howling wind certainly had our attention. This weekend's storm wasn't nearly as dramatic by the time it reached us. We finished our work at the dairy about fifteen minutes before it was projected to cross between Vernon and Sulligent, and as it got closer it progressively tracked further to the north. There was hardly any rain with it, allowing me to stand on my front porch and clearly see it approaching from the west. I even posted a couple of pictures of the system to Twitter and found out later that a television station in Birmingham showed them during their coverage.

We did get hit by a thunderstorm about an hour after the first system passed by, but the heavy rain and strong winds only lasted a few minutes. After that, we never saw more than an occasional gust of wind and light rain as the rest of the severe weather stayed clear of us.

We've weathered quite a few storms over the last few years, and we're lucky to have escaped them all with no injuries to us or our cattle and very minimal damage to any of our property. Our luck may run out one of these days, but for now I'm happy to say that we dodged the tornado...again.

While today might be the official celebration of Earth Day, America's farmers and ranchers are doing their part everyday to conserve resources and protect the environment. On our farm alone we've adopted cropping practices that have allowed us to grow more of our cows' feed while reducing erosion and using less inputs. We also have and continue to improve our nutrient management in such a way that it proves to be an economic and environmental asset as fertilizer and not a liability as waste.
Our farm and others across this country will continue to adapt and embrace new conservation practices and technologies. Doing so will better enable us to be good stewards of our land, while at the same time meeting the food, feed, fiber, and fuel needs of our growing population.

So enjoy and celebrate this Earth Day, and take comfort in knowing that America's farming and ranching families are celebrating Earth Day everyday!

Yesterday afternoon I fired up the old cutter/conditioner and started laying down our forage rye. We'll run it through the silage chopper this morning and, if the equipment seems to be working like it should, cut more to chop tomorrow. I'll post more about it as we go through the harvest, but in the meantime you can learn more by watching our latest GDF MooTube Minute:

Still in the cornfield

There are few things in this world that are non-debatable...God loves us, the sun rises in the east, and things will happen that cause your field work to run behind schedule. Monday morning I thought we would be finished planting corn on Wednesday, giving us enough of a window to begin harvesting our rye by the end of the week.

From needed supplies not arriving as early as expected to a couple of mechanical problems, we were not able to begin planting until Tuesday evening. If all goes well today, though, we'll be cleaning and unhitching the planter on Friday morning. That won't give us enough time to start our rye harvest before the weekend, but by Monday we should be ready to go.

You can hear me talk about our corn planting this spring in the latest edition of the Gilmer Dairy Farm MooTube Minute:

The calm before the storm 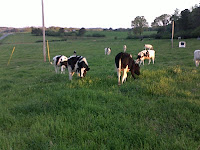 It's a beautiful morning here on the farm! The birds are singing, heifers are lazily grazing away in their pastures, and the sunlight is making the dew on our rye fields sparkle. All is peaceful, all is calm.

But not for much longer!

We'll spend much of today furiously preparing to plant corn...servicing tractors, calibrating equipment, and even making a supply run to Columbus. If all goes well, we'll start late this afternoon the really "hammer down" on Tuesday and Wednesday. We have 80 acres of corn to plant, and planting it four rows at a time will probably take a little better than two days.

But planting corn is only part of what we intend to do this week. While some of us are in the cornfield, the rest of us will be preparing our harvesting equipment. The plan is to begin cutting rye on Wednesday so we can begin chopping it for silage on Thursday. And, of course, we'll have to take the time to milk the cows and feed all the animals each day.

So here's hoping for clear weather and no mechanical problems over the next several days!
Posted by Will Gilmer at 6:34:00 AM 1 comment:

Things seem to be moooving right along here on the dairy.

Our cows have been able to graze every morning this week. We have 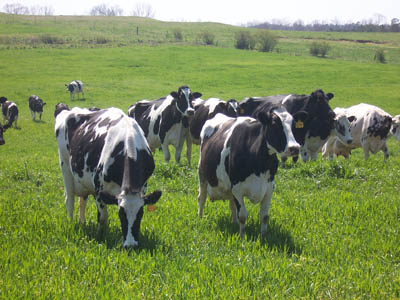 been giving them their normal TMR in the evenings (dry hay, silage, and dairy feed), but have only given them their dairy feed and a reduced amount of silage in the mornings after they've been milked. We have been turning them into the wheat/ryegrass paddocks at approximately 10AM and leaving them until afternoon milking time at 1PM. They have been spending most of that three hour window actively grazing, and this feeding/grazing schedule has resulted in our cows producing nearly four pounds a day more than this time last week. Plus, we're conserving our dwindling silage and hay supplies until we can harvest more forage. 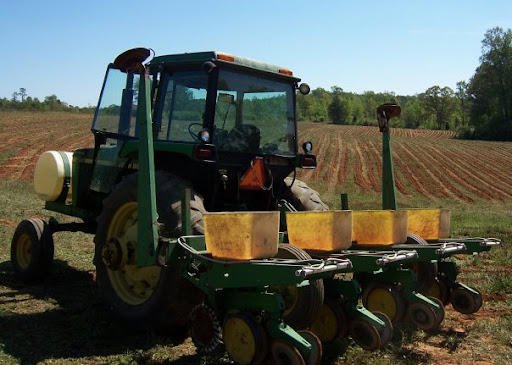 We are also on pace to start planting our corn next week. All of the lime and nitrogen fertilizer our soil tests called for has been applied (we didn't need any phosphorous or potassium this time) and most of the field preparation has been completed. Our intention is to start on Monday, and barring any problems we should be finished after three days. It's been a couple of years since we've planted corn, so we're really hoping for a good crop this year.

Our rye is continuing to grow and is nearing time to be harvested, and we 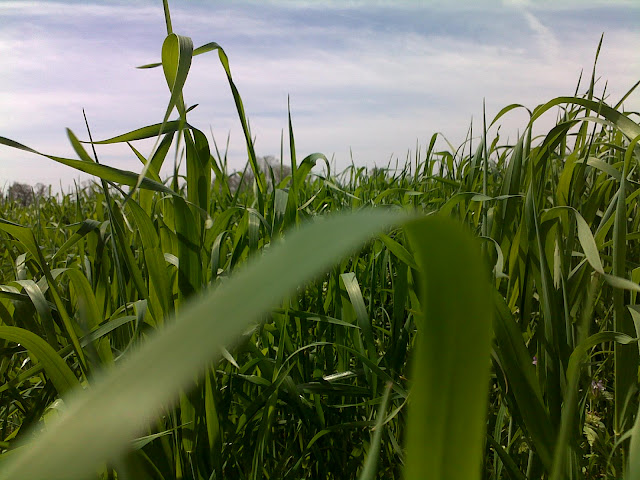 plan to start doing so week after next. We will cut it all with our cutter/conditioner, a machine that will crush the stems (to help it dry more quickly) and leave the cut material in a row. We will then chop it for silage and pack it into an empty silage pit. If we fill the pit or have a major breakdown on the silage equipment, we will bale it as green hay and plastic wrap the bales to ensile it.

So here's hoping for ideal weather an no equipment malfunctions so we can keep on moooving right along!
Posted by Will Gilmer at 6:53:00 AM 3 comments:

It's springtime here on the farm...better weather, longer hours, and more to do than we have the time, labor, or (working) equipment for!

On the animal front, we have bred 38 heifers over the last month and only have 6 more to go. Our local large-animal veterinarian was on the farm last week and performed pregnancy exams on 23 heifers and 60 cows. All but one of the heifers he examined were pregnant, and all but two of those conceived through artificial insemination. On the cow side, I think 54 of the 60 were pregnant as well.

We've had a two week lull in our calving and currently only have six young calves on milk after weaning seven earlier this week. 209 cows are going through the milk barn everyday, but that number will be reduced as we have 5-6 that are ready to be dried off and don't have but that many due to calve within the next two weeks.

The sunshine and warmer temperatures are putting our fertilizer and all of the rainfall we've had to use. Our planted forages are very green and showing noticeable growth, especially the rye. Fescue and volunteer ryegrass in many of our heifers' pastures are also putting out enough that we've been able to reduce our hay feeding by at least a third. The wheat/ryegrass mixture we planted for our milking herd to graze will be ready as soon as we can string up some wire and divide it into smaller paddocks.

We're also on the verge of planting corn, and hopefully we'll be putting seed in the ground this time next week, though I suspect now it will probably be the second full week of April before we start the planters. We started disking the fields yesterday, and will have fertilizer spread and disk the fields one more time before we plant. This is the first time in I think 4 years we haven't "minimum tilled" our silage crop, but we need to turn the soil this time to smooth out several rough places and fill in some ruts and washes.

Yesterday I posted this picture of one of our pregnant heifers the Gilmer Dairy Farm Facebook page and asked people to suggest a clever caption for the photo. If you'd like to join in the fun, post a suggestion below or go over to the facebook site and add to the 2 dozen already submitted there.