I often forget that some people may not fully understand some of the words or phrases I use when talking about my family's dairy farm. With that in mind, I've decided to start a new video feature on our farm's YouTube channel: GDF Vocowbulary. I plan on making this a weekly series, and I hope it will help explain some of the terminology we use when talking about our farm or industry.

For the first lesson, I chose to explain what "dry cows" are. I've got a whole list of words and phrases I can focus on in upcoming lessons, but I really want to choose the terms that you are most interested in learning more about. If there is something that you would like to have defined or explained, please let me know via this blog, my Twitter account, or our Facebook page and I'll make sure to prioritize it for a future video.

So sit back, hit the "play" button, and learn a little bit more about dry cows. I hope it's helpful, and please share it with your friends!

We've spent several hours in the hay field lately, so I thought I would give you a quick update on our progress.

Our first bermudagrass hay was cut two weeks ago, and at the time it looked like the weather forecast would be favorable to bale it two days later. Well, things changed, and what started out as a "30% chance of isolated showers late Wednesday" became a half inch of rain at 8:00 that Wednesday morning. That was followed by another 3.5 inches that evening. We did get the hay dried out and raked at the end of the week, but my dad didn't get halfway through baling it on that Saturday before a belt broke on the baler. We got it fixed the following Monday, and wound up with 96 bales off of 17 acres. Not bad considering the conditions. 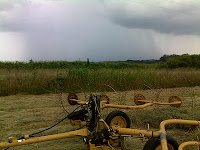 We put the mowers back on the tractors last Thursday and set out to cut another 18 acres. The hay would have been ready to rake and bale Saturday afternoon. But again, dry hay on the ground is a great magnet for rain. We dodged the big rains and didn't get much more than a sprinkle, but it was enough to keep us out of the field that day. 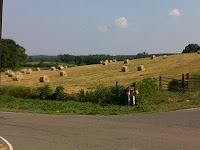 So, while I spend Fathers' Day afternoon in the milking barn, my dad spent it in the hayfield with the rake and baler. By the time he was finished, he had rolled 147 bales (nearly 3 tons per acre). I haven't gone back into my files, but I think that's the most that field has ever yielded on one cutting. 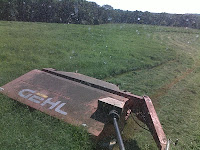 So, coming into this morning we had 243 bales from 35 acres, with 40 more acres to go. We got the hay mowers rolling about 10:30 this morning and covered all the ground by 5pm. The three fields we cut today have some spots of invasive crabgrass which won't dry out nearly as quickly as the bermudagrass, so we'll have to "fluff" it with our hay tedder tomorrow or Wednesday before we rake it. Hopefully for once we can avoid the rain until we have it baled later this week.

And THEN maybe we'll get some rain to get it all green and growing again!
Posted by Will Gilmer at 9:34:00 PM No comments:

Become a "Friend of Elsie"

June is Dairy Month, and becoming a "Friend of Elsie" is a great way to help us celebrate!

When you visit www.friendsofelsie.com, you'll find lots of good stuff, including a Father's Day-themed bl0g post I wrote as well as lots of recipes.

I'm partial to the Fast Fiesta Cheeseburger...great for tailgating!
Posted by Will Gilmer at 9:30:00 PM 1 comment:

At the Youth Leadership Conference

I'm at the 4-H Center in Columbiana this weekend attending the annual ALFA Youth Leadership Conference. The state's Young Farmers Committee is responsible for facilitating two of the workshops: Ag Jeopardy (pictured) and Addressing Misconceptions About Agriculture. 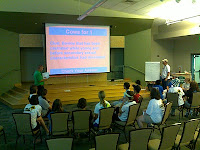 Many of the delegates do not come from an agricultural background, and most will go into careers outside of agriculture. We hope that our conference will help them develop into stronger leaders in whatever fields they choose to enter, but we also recognize we have an opportunity to foster a greater understanding and appreciation of agriculture.
The continued success of American agriculture doesn't just depend on production and profitability, it depends on the public allowing us to continue farming in a way that's productive and profitable.
Building relationships and sharing information about our industry with future leaders is one more step we can take today to make sure we'll still be farming tomorrow.
Posted by Will Gilmer at 9:13:00 AM 1 comment:

We were all over the farm today. After we finished with a few basic duties (milking, feeding, cleaning, etc.) we started gearing up to attack the day on multiple fronts. With no morning dew and no rain in the forecast for the next several days, I was able to get an early start in the hayfield to mow our first bermudagrass of the summer. I cut about 16 acres today, and might have cut a few more if not for a nagging hydraulic problem that was slowing me down. I'll fluff the cut hay tomorrow and it will probably be ready to bale on Wednesday afternoon, Thursday at the latest.
Meanwhile, the local co-op delivered a fertilizer buggy for us to pull across our creek bottom fields. Our thought was to have one of our employees spread while a second followed behind with a disk to incorporate it into the soil. Unfortunately the fertilizer kept bridging up and wouldn't spread consistently, so they lost a good bit of time trying to fix that problem. They ultimately worked between 18-19 acres, leaving roughly another 25 to go. My dad moved the planter down to the bottom and planted 7 acres after all of the afternoon milking and feeding chores were finished. We'll have the co-op send in a spreader truck to finish the fertilizing tomorrow morning, and barring any problems the disking should be completed by early afternoon and all of the corn should be in the ground by the end of the day.

We may not have covered as much ground or moved as quickly as we would have liked today, but we made progress towards harvesting hay and planting corn. All-in-all, I guess I'd have to say it was a pretty good day.
Posted by Will Gilmer at 9:48:00 PM No comments:

Ever year in celebration of June Dairy Month we hold a Milk Mustache contest. We'll take entries throughout the spring then select three finalists in early June. We named this year's finalists yesterday.

Making the selection was very tough due to the many quality entries, but, just like good cream, these three rose to the top. Anyone who "likes" our farm's Facebook page can help us pick a winner by simply clicking "like" under the photo you think is the best. Fan voting is open through Sunday, June 13, and we'll announce our 2010 winner on the 14th.

Yesterday I walked out into the pasture behind our tractor sheds to herd some heifers towards our working pen. As I was getting behind them I started hearing a strange banging noise coming from the lean-to they often use for shade. Upon further investigation, one of the heifers had somehow managed to get herself upside-down in an empty water trough. After snapping a quick picture, one of our employees and I pushed the trough over so she could roll out of it.
Luckily we found her pretty quickly. She was trying to get out but could not, and in that position she would have began bloating before very long. She definitely got herself into an emergency situation, but we got her back on her feet before any damage was done.

By the way, her id number is 911. I think we'll have to keep a close eye on her over the next few years!

Scattered thoughts on a foggy Wednesday 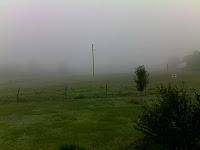 The fog started rolling in a few minutes before 6:00 this morning, a sure sign that it's going to be another muggy day here in northwest Alabama. Though it won't be terribly comfortable, we already have three hours of work under our belts this morning and might as well go for 8 or so more!
We'll have one tractor back in the cornfields this morning trying to clean up the weed problems while I "burn-down" a couple of other fields in preparation to no-till plant some late season silage corn. We have enough seed to plant 45 acres, which is how much acreage we have in Yellow Creek bottom. However, it looks like we'll never get all of that acreage dried out before our corn planting window closes. So, we'll plant as much as we can in the bottom then finish out in a couple of our upland fields (17 acres worth). Hopefully we'll be able to use most of that seed in the bottom and can go back to our original plan of planting sudex on those two other fields. 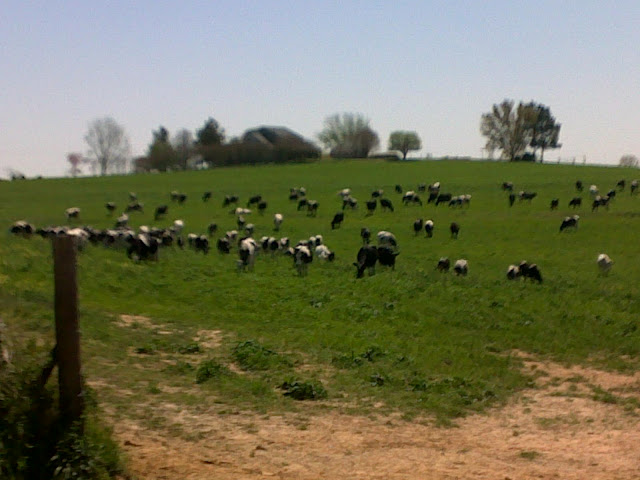 Speaking of sudex, we'll probably be drilling that into our milking herd's grazing pastures next week. The ryegrass has just about played out and the cows are making their final pass through each of the paddocks.

So last week was mostly focused on herd health, this week is on weed control, next week should be planting, and the week after that? Harvesting bermudagrass hay, hopefully!

Quickly, a couple of words about Alabama politics. John McMillan and Dorman Grace, the two most qualified GOP candidates for Commissioner of Agriculture and Industries, are headed towards the Republican Party's July run-off ballot. The winner of that election will go on to face unchallenged Democrat Glen Zorn in the November general election. Also, congrats to fellow young farmer Clay Scofield for pulling in the most votes for the GOP's nomination for State Senate District 9's seat. Best of luck in the run-off, Clay!

Cleaning up the Cornfields

This morning I took a tractor for a spin through a cornfield, driving down the rows while spraying glyphosate (RoundUp) to kill weeds. We have broadleaf signalgrass pretty much everywhere, with spots of johnsongrass, cucklebur, and morning glory scattered here and there. All of these weeds compete for the same moisture and nutrients that our corn needs, so by killing them we expect our corn to be more productive and ultimately provide more nutrition for our cows.

Our method of spraying our corn isn't terribly fast or efficient. We're using a three-point hitch sprayer assembly with a 200 gallon tank and a 12 foot (4 row) boom. We have a spray wagon with a 300 gallon tank and 30 foot-wide coverage that we typically use for all other applications, but its tires are likely to down an unacceptable amount of corn as we pull it across our curvy, terraced fields. It sure would be nice to have a high-boy sprayer, but I don't our less-than-200 acres of cropland is quite enough to justify buying one of those babies!

If you'd like to take a look at our fields and see the contrast between where we got partial and no control with our pre-emerge application, you can do so in our latest MooTube Minute.