As March draws to a close, the grass continues to grow, and my father and I have less out-of-town meetings to attend, the activity on our farm should really start picking up.  That's not to say we've just been sitting around the last few weeks, because there's always something to be doing on a dairy farm.

We've continued to have good springtime weather over these past few weeks, and as a result our cows have been grazing nearly every morning.  We're still working on cross-fencing one of the pastures that they will begin to access later this week, and I've already applied a light dose of nitrogen fertilizer to some of the grazed ground.  The cows' milk production has leveled off after the initial increase that came along with the start of their grazing, and they should be able to maintain that production until late morning heat becomes an issue.
In other farm news, our spring harvest will probably begin in two weeks.  Weather will certainly play a role in whether or not it's fully ready by then, but we wouldn't mind starting even if it's a tad bit early since it will likely take us two weeks to complete the harvest.  Our plan is to chop the majority of it, but we will likely try to bale and wrap a few acres worth as well. 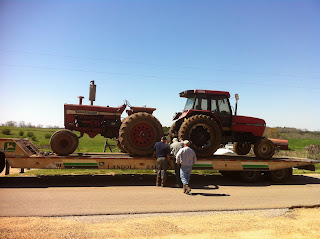 Finally, we said goodbye to an old friend this past week.  My grandfather's old IH 1456 tractor was traded off along with our Case 5230 for a '97 model John Deere 7810.  Ol' Red had served us since my grandfather gave her to us about 12 years ago, but she was just one heavy load away from needing to have the engine rebuilt for the second time in three years.  With neither it nor the Case able to reliably handle our feeding wagon, we decided we should swap them out in favor of a larger tractor with more horsepower.  Even though we needed to make a change, I'll certainly miss Ol' Red.
Posted by Will Gilmer at 9:51:00 PM 3 comments:

We milk our cows twice a day, every day on our dairy farm. Today being Mardi Gras, though, I decided to have a little fun with it and asked our cows to "show me your teats!" And they did...all 210 of them. Twice! (and it didn't even cost me any beads)
Some were big... 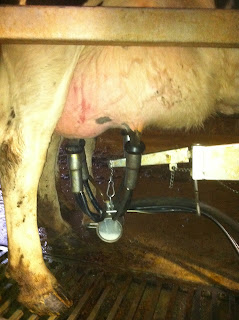 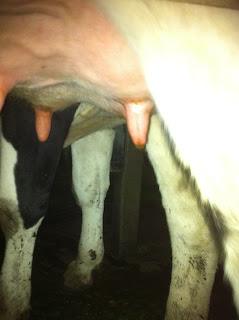 but by 4pm we had twice milked them all! 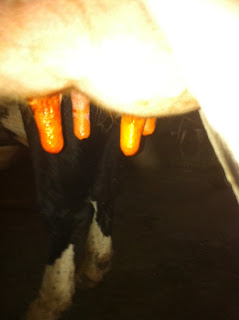 Have a festive Marti Gras everyone, but please don't give up delicious, nutritious dairy products for Lent!
Posted by Will Gilmer at 6:03:00 PM 3 comments:

We couldn't hardly have asked for more favorable weather over the past three weeks, and most of our farm is turning a nice deep shade of green.  Generally mild temperatures and well-timed rains have helped our fescue pastures and our fields of spring forages (triticale, oats, rye, and ryegrass) start growing up (stem) and out (leaf).  Even the the bermudagrass hayfields are turning green due to a healthy stand of spring weeds, a situation I hope to address within the next couple of weeks.
I spent the first half of this past week applying additional nutrients to one of our grazing areas in the form of 100,000 gallons of dairy slurry.  Meanwhile, we started grazing our cows for 4-5 hours each morning on the adjacent field of rye and ryegrass.  Not only has grazing allowed us to "cut out" 1 ton of corn silage, 1.5 tons of baleage, and 4 pounds/cow of dairy feed from their TMR, it has also resulted in a 4 pound/cow increase in milk production over the course of the week.
I won't be able to resume my slurry application this week thanks to nearly 3 inches of rain this weekend and another rain system predicted for Wednesday.  Despite the rain, though, our ground is still in good enough condition to allow our cows to go out on the fields and graze.  Look for them if you happen to drive by the farm one morning this week!  If you're not going to have that opportunity, you can do the next best thing by watching the cows graze in the video below.
Posted by Will Gilmer at 6:37:00 PM 1 comment: