The Baler Rolls - a song about baling hay 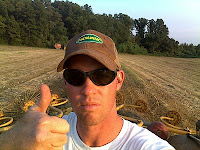 Yesterday afternoon we baled what will probably be the last of our bermudagrass hay of the summer. With that in mind, I decided I should try to get a few minutes of video before the baler finished it's duty for the season. As I filmed my father harvesting the last few acres, I was trying to decide whether or not to piece the clips together and make another "MooTube Minute", a "Vocowbulary" video, or just store it away as archived footage.
Then, out of nowhere, the old Garth Brooks song "The Thunder Rolls" popped into my head. By now you can probably see where this is going. It didn't take very long for the song title to morph into something else, and by the time I shut off the camera I pretty much knew what I wanted to do with the video clips.

By the end of the evening I had thought up and recorded a full set of lyrics and pieced them together with video clips and still photos related to growing and harvesting bermudagrass hay. The end result is an off-key, amateurishly edited music video called "The Baler Rolls: a song about baling hay."

I've posted a few songs on our YouTube account before. Some are more educational than others, some are sillier than others, but they're all done in an attempt to entertain you. You may not learn much from this or any of my farm songs, but I hope you get a chuckle and will keep coming back to watch all of our farm videos.


Three thirty in the evening, the sun is shining bright. The hayfield’s ready for a baling, the windrows are raked up tight. Veil of dust on the windshield from the hay that’s going in. The tractor runs across the field then turns and comes again.

It was only three days ago we mowed the Bermuda down. It dried out just perfectly as the sunlight beat down. It’d probably be a miracle if the equipment keeps working right. But if we can keep it running we’ll be done before tonight.

The baler rolls the hay up tight. There won’t be no mold, ‘cause we cured it right. As the year goes on and the days turn cold, our cows’ll eat the hay the baler rolls.

We raise hybrid bermudas: Russell & Tifton 44, two varieties that grow well on our well-drained Southern soil. When they get enough sun and rain through the summer they’ll really grow. We can usually harvest three times and if we’re lucky maybe four.

Love your creativity Wil!! I haven't followed your blog, but I do recall the song about poo!

Having grown up on a dairy farm, I especialy related to the line - "It dried out just perfectly as the sunlight beat down. It’d probably be a miracle if the equipment keeps working right." Thanks for your creativity and for you work as a dairy farmer!

This may be my favorite!