Our farm is situated along a two-mile stretch of the main road running from AL-Hwy 17 to Winfield. People can oftentimes see our cows as they drive by because several of our fields and pastures are visible from the road. This also means they see lots of deer on our property this time of year. Occasionally a big buck is spotted, and word spreads like wildfire.

A few family members and family friends hunt on our farm, but for the safety of ourselves and our cattle we don't want just anybody running around our farm with a high-powered rifle. "Just anybody" includes hunters whose lust for a "trophy" trumps their ethics and/or respect of others' property. These folks probably know who they are, so they never ask permission to hunt. The reward of a big set of antlers outweighs the risk of getting caught, so they hunt wherever they think they can kill a big buck. Deer season has only been in a couple of weeks and I've already had two problems with these types of outlaw deer hunters.

I was planting a seven acre field the week of Thanksgiving and noticed two tree stands along its back edge. One belonged to a friend of mine who comes to hunt 2-3 times a year. He set it up last season with the expectation of hunting out of it again this year. I'm not sure where the second stand came from, but I could see a deer feeder hanging in the woods not very far behind it. I also discovered a very big corn pile in the corner of the field not thirty feet in front of that stand. It's not illegal to feed deer in Alabama, but it is illegal to hunt where deer are actively being fed. Someone's decision to bait deer on my farm's property is costing me and my friend an opportunity to hunt there.

The other problem happened this afternoon. My last farm chore of the day is to feed the calves in the pasture behind my house. After doing so, I pulled out my binoculars and looked across into the field I usually hunt in. I didn't have any intention of going out there today, but was interested in whether or not any deer were out and about. While scanning across the landscape, I saw something moving about 600 yards away. That something was a someone who didn't have permission to be there. Instead of calling Gamewatch to report someone hunting our land without permission, I decided I would just drive over there and ask him to leave. He apparently weren't interested in a conversation and ran off through the woods, leaving behind a nice camo jacket, a deer call, a flashlight, and a bottle of "doe pee".

Deer season runs through January, so I'll probably encounter more problems between now and then. I just hope I can make it through the next two months without getting shot at by one of these idiots. 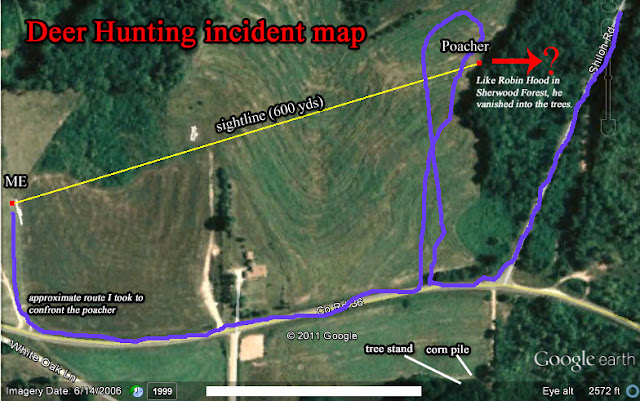 Great post, Will. This is a problem in every part of our country. People care about open lands, but evidently some people don't care enough to ask permission to use them. A very dangerous situation for all!

You need to set up game cameras. I would. Always helps if you ever have to pull that trigger on something 2-legged - not to even manage the fact that it can cut that possibility down by 70 percent. Just be careful.

Will, we actually had someone plant a greenfield on our property and was hunting it when we caught him. Unbelievable what folks will do these days.

Hey, you should post a "found" in your local lost and found classifieds. Maybe the owner of the "lost" items will come forth to claim them... then you could.. at least have the satisfaction of having that conversation.