Good morning, y'all. Let me get you caught up to speed with what's been happening on the farm and bouncing around in my brain...

Tough April for my milking cows 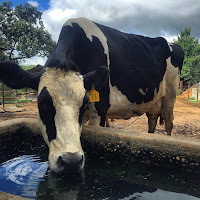 Our milking herd finished the month of March relatively strong and near peak milk production. That changed the first weekend of April as a "bug" began working its way through our herd and resulted in quite a number of our cows developing pneumonia. Roughly two dozen cows required treatment for the illness, and milder symptoms appeared in dozens more. From a "whole herd" perspective, we lost nearly two whole days' worth of milk production over two weeks while the illness ran its course. And though all of the affected cows now seem to be fully recovered, they still haven't (and likely won't) return to their late-March level production due to the earlier-than-normal onset of heat stress. It's been a hot, dry April, and the "summer slide" that usually doesn't begin until mid-May is dangerously close to starting if it hasn't already.

It's finally time to plant corn
Last week I sprayed weed-killer on our corn fields and had the appropriate levels of fertilizer applied, and yesterday I used our strip-till to lay off rows for our first 10 acres of corn. We'll calibrate the planter this morning and hopefully have some seed in the ground before lunchtime. I expect us to plant approximately 110 acres of "hill ground" over the next couple of weeks and another 40 in our bottomland in early May. We made a late decision to (finally) move our row spacing from 38" to 30" and probably could have been planting a week ago if not for the time required to adjust our tractors and implements for that spacing change. We're four days behind last year's first planting date, but if the weather cooperates we should finish planting earlier than in 2016.

Mulling over a political run
As if the daily care of 400 head of cattle, the twice-daily milking of half of them, and the pressure to produce a good crop to feed them following last year's devastating drought weren't enough to occupy my time and mind, I've also been considering jumping into an upcoming political race. I've jokingly alluded to running for office before, but I've actually given it some serious thought lately. There are two offices I am interested in that will be up for election next year, and I would need to commit to running for one of them within the next few weeks if I am to have any chance at all. There are many, many questions I'll have to think through in the process of making that decision, the biggest of which is whether or not I have the resources to mount a campaign without compromising my farm's productivity or putting my family in a tough spot. Odds are I'll just stick with what I know for the time being, but it's a matter of prayer consideration.

Bonus thoughts
I'm helping coach my son's youth baseball team again this year. Working seventeen kids (yes, 17) into a 1:15hr game is a challenge, and scheduling a game for 11/12 year olds at 8pm on a school night is ridiculous (I'm looking at you, Guin).

Oh yeah, if you'd like to read about the trip I took with several other dairy farmers to this year's South by Southwest Festival in Austin, Texas, you can check out these articles at AL.com and Progressive Dairyman.

Thanks for reading, and y'all have a dairy good day!