Forty heifers wandering in the Wilderness

We knew early on Wednesday that we might have a problem.


One of our farmhands and I were making the last stop of the morning feeding rounds in a pasture we call "The Mountain." The sprawling 120 acres of hilly open pasture and wooded bottom land gets its nickname for steep hill that offers a clear view across Beaver Creek Bottom. The group of 40 pregnant heifers currently residing at The Mountain receives feed pellets every-other weekday, and we usually find them enthusiastically waiting at the gate on those days. This time they were no where to be seen. We decided to pour the feed into their troughs and then ride up and down the pasture's hills until we could find them. We were unsuccessful, and decided they must be in one of the pasture's wooded areas. We left to attend to other farm chores but decided someone should check back later to see if the heifers ever made it to their troughs.

The heifers were still unaccounted for after lunchtime, so halfway through the afternoon milking I sent the aforementioned farmhand back to the pasture with an ATV to conduct a more thorough search. He discovered an ancient wooden fence post had fallen over and allowed the heifers to step over the barbed wire and into the woods. He called to report back and then began tracking the heifers into the pines. 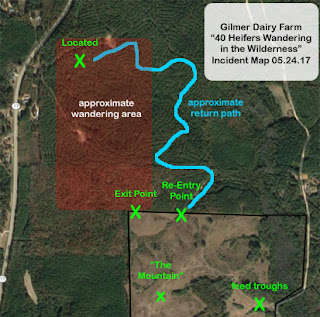 We finished milking our cows shortly thereafter, and that's when my father, our other farmhand, and I joined the search. We eventually found them off of an old logging road about a half-mile from their pasture (and dangerously close to the nearby state highway) and began the process of herding them back home. My father "pushed" them through the wilderness by foot while the rest of us took up positions to funnel them into their pasture. The initial effort was somewhat disjointed as we often found ourselves out of earshot and without cell phone service, but after an hour of slow meandering progress we finally got them back through the fence and into their pasture. They were obviously happy to be back in familiar surroundings and sprinted across the pasture to find the feed that had been poured into their troughs hours earlier.

One absolute truth about pastured cattle is that sooner or later they will get out. We were fortunate in this instance that it happened on a weekday, it wasn't raining, and they didn't reach the state highway. Knowing that we may not be so lucky next time, I hope this group of heifers got the rambling fever out of their system and will resist temptation the next time a downed fence presents an opportunity to escape.

"I hope this group of heifers got the rambling fever out of their system and will resist temptation the next time a downed fence presents an opportunity to escape."

Hope springs eternal. The hogs I raised in high school would have beaten me back to the exit point and repeated the experience.