Harvesting our "second cutting" of hay isn't exactly working out as planned.
Over the weekend, the local extended weather forecast was calling for hot, dry weather, with only about a 20% chance of a passing shower Monday and Tuesday. With that in mind, we figured we could mow, rake, and bale all of the 60 acres that was ready to harvest by the time the week was over.

Mowing went by without incident. We finished cutting the bermudagrass on Tuesday, and planned to begin raking and baling mid-morning the next day as soon as the dew dried off.

Then the rain clouds came. A little better than a quarter-inch fell Tuesday evening, and I was not feeling too great about our plan.

Thankfully though, there wasn't a cloud in the sky Wednesday morning. I started running the hay tedder through the first field we had cut around 11am, and by 1pm the hay had dried out enough to rake and bale. We were 2-3 hours behind due to the previous day's rain, but no big deal. Everything was working great...I had moved into another field with the tedder while one of our employees raked and another quickly rolled up 25 bales.

Then our luck started to turn sour.

As I finished tedding the second hay field, I noticed that one of the implement's tires was on the verge of blowing out. I called my dad at the milk barn to tell him I could ease it into the next field, but it couldn't make the trip back "home" until the tire was changed. That's when he told me we had bigger issues; namely, a belt had broken on the baler.

Dad headed to Columbus to get it repaired, and about three hours later he and I were back in the hayfield. Everything ran smoothly for a while until the dew started falling around sunset. The ground was still a little moist underneath the windrows, and the dew dampened the hay just enough to make us shut down for the evening.

This morning we got an early jump on it, sending the rake out at 10am with the baler following a half-hour behind. Once again the job started off good, but an hour into baling we had a minor problem with a sprocket. I took over the baling duties once that problem was fixed, but twenty minutes later a chain jumped off and caused another chain to break. After an hour spent at the shop, the baler was once again ready for action. One bale later, a small chain on the other side of the baler slipped off it's idler sprocket. That would have been easy enough to correct in the field if not for the fact that the idler came apart while getting the chain back in place. Back to the shop!

Dad and one of our employees repaired the problem while I went to help our milk hand finish milking duties. The baler was back in the field by the time I finished milking duties, and luckily there have been no mechanical problems since then. We shut down for a while to rest and eat supper, then I raked for a while until dad returned to bale just about sunset. With the ground now dry, the dew shouldn't be much of an issue until later tonight. 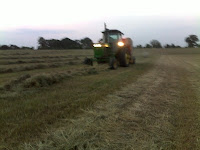 I'm back home now, and as far as I know dad must not be having much trouble with the baler. We should have 15-20 acres remaining tomorrow if he can bale tonight all of the hay that's already been raked. Barring any major breakdowns or rain (there's a chance tomorrow afternoon), we SHOULD be finished with our "second cutting" by this time tomorrow evening.

I'm not going to count my hay bales before they're rolled, though!
Posted by Will Gilmer at 5:34:00 PM

Ahhh, break downs, where would we be without them? HA! Happy harvesting.