That's the question our local large-animal veterinarian will be answering when he comes to our farm this morning to check about 80 cows and heifers for pregnancy. 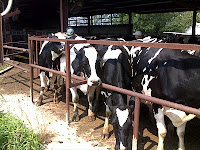 Many of the cows he'll examine were artificially inseminated with Angus semen during the summer. We decided to use Angus from mid-June through August because it was best economical option during what is historically our lowest conception-rate season. We suspect most of the cows are pregnant because we haven't seen them come back into estrus (heat), but we want a professional opinion just in case there are any problems with the cows' reproductive systems.

We AIed the group of heifers in question at the beginning of summer, and they've had a bull roaming the pasture with them ever since. After examining each heifer, the veterinarian will be able to tell us if the size of her fetus matches up with her AI date or if she was likely bred by our herd bull. Any heifers that he calls "open" (not pregnant) or suspects of being short bred (<30 days) will either remain with the bull or will be sent to pasture with the next group of heifers we'll breed in early December.

In other farm news, we dried off 15 pregnant milkers yesterday, dropping our total number of cows in milk to 169. This is our lowest point of the year, but we'll be rebounding shortly as we'll be calving-in many more than we'll be drying off over the next few months. On the forage planting front, I planted rye and triticale on 30 acres of prepared ground last week (see the MooTube Minute below). We can possibly finish planting oats on the prepared ground this week if we get an overnight rain. I don't expect we'll be in any hurry about no-tilling our grazing land, so it will probably be the first of November before we start planting the rye/ryegrass mixture.

If you happen to be in Indianapolis this week for the National FFA Convention, make sure you swing by the AFBF YF&R booth at the Career Show and say hello!

I like to use what the Hispanics told me is slang for pregnant.

Hope it's a good check.

Hey Will. Keep up the videos -- fun and like this one informational in nature. Great combination!

I added myself to follow your blog. You are more than welcome to visit mine and become a follower if you want to.