From the milk house to the courthouse?

It's a question I've been asked with increasing regularity over the past few weeks in regard to the soon-to-be open position of Probate Judge in Lamar County. For those of you unfamiliar with my county's politics and interested enough to continue reading, our probate judge essentially serves as our county's CEO with duties that include overseeing all matters of probate (obviously), issuance of car tags, and serving as the chairman of the County Commission. Our current judge recently announced he would retire at the end of this month rather than serve out the final year of his six-year term. This leaves Gov. Ivey with the responsibility to appoint someone to fill the position until a candidate is elected in November. 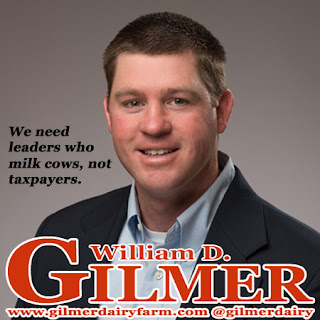 I've playfully teased the idea of running for public office on social media before, from posting faux campaign images like the one above to sarcastically tweeting about my willingness to fill Jeff Session's former Senate seat if asked. If there's one political job I've ever been genuinely interested in, though, it's the one I'm now being asked about.


Two months ago, I received word of Judge Rogers's retirement along with an offer to have my name passed on to the governor's office for appointment consideration. Caught completely by surprise, my initial excitement at the prospect diminished over the course of a few days as I couldn't come to peace with it through prayer. I declined the opportunity to be considered, deciding that the potential opportunity to temporarily hold public office wasn't worth the guilt and regret I would feel if I were to walk away from the family farm.

So to answer the question at the top, my answer is...at least for now..."no."

As I mentioned in my last blog post, we have already started taking steps to slowly transition out of the dairy business. I'm kicking around the idea that on-farm processing might be a viable way to sustain the dairy, but that is far from certain at this point. Honestly, I don't know what the future holds. Should I be looking at local politics as a better way forward for myself? I don't know. The best thing I can do is keep praying for the faith and courage to travel the path God intends for me to travel, which means I need to keep doing what I'm doing until He (and not my own ambition) leads me in another direction. Yeah, I'll have a serious case of the "what ifs" after Governor Ivey announces her appointment and again after November's election, but I think I'll be at peace about it.

On a final note, I am thankful for those of you who have expressed confidence in my ability to successfully handle that position. Your encouragement is greatly appreciated, and I'll be sure to let you know if something changes between now and the qualifying deadline.

2/10/18 Update: An interim has been sworn-in, the qualifying deadline has past, and I'm quite happy to be focused on my farm's future rather than a political career.