It's early Saturday evening, and I've just gotten in and cleaned up from the afternoon milking. The kids are watching television, my wife's taking a nap, the rain continues to make the recent drought a distant memory, and I'm here to share a few updates and random thoughts with y'all in between sips of a mug of milk stout. So without any further ado and with no particular order in mind... 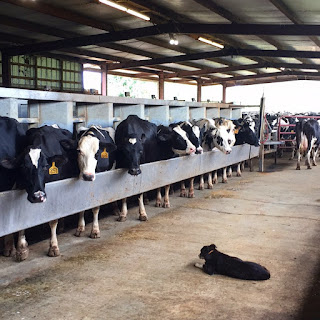 Milking herd update: We broke the 200 cows-in-milk threshold this week for the first time in several months. How high we climb over the next six weeks will depend largely on how many cows we dry-off early or cull from the herd, and with no cow records in front of me at the moment I'll guess we'll top out around 215. The herd's milk production hasn't been as good as we'd like but should improve as we start feeding corn silage with a little higher grain content.

Is processing in our future?: While we are taking steps to establish a beef herd as an exit strategy, I'm finding myself more and more interested in the idea of processing and marketing our own milk. Over the next few months I hope to visit several small-to-midsize dairies in the Southeast that are doing just that and get a better feel for the opportunities and challenges. If I can make it pencil out without running myself slap to death, Gilmer Dairy Farm milk, cheese, butter, or ice cream may be coming to a store near you one of these days. We are a long way from that point, but it may be the last best option for staying in the dairy business.

Milk price update: Ummmmm, let's skip to the next one.

I'm not the agvocate I used to be: Back in the day, I used to blog and tweet a lot more about the larger issues connected to agriculture. I faithfully fought the good fight, addressing people's misconceptions of how their food is produced and explaining how a particular public policy could make or break an entire industry. I may have never been one of the ringleaders or most influential voices when it came to the heavy-lifting of agricultural advocacy, but I did what I could. And it about burned me out. Nowadays, I just enjoy sharing the day-to-day of life on my dairy farm without the pressure of trying to be an "agvocate." Yeah, I still talk about issues from time to time, but I pick my battles. Honestly, I think people might put more stock in my opinions because of that...kind of that whole "they won't care how much you know until they know how much you care" thing. By the way, "agvocate"...shorthand jargon for "agricultural advocate"...is a dumb, made-up word and I've been wanting to say that for years. Don't @ me.

Meetings, meetings, and more meetings: Lots of agricultural meetings are scheduled for the first three months of the year because no one's in the field and row croppers don't have anything better to do (again, don't @ me). Back in January I went to my first American Farm Bureau Federation Annual Meeting since rolling off the Young Farmers & Ranchers Committee in 2011. I saw lots of old friends and loved being part of the policy adoption process again. This past week I had dairy meetings down in Montgomery, and I'll be going back to the capital on Monday to hear candidates for statewide office give their pitches as to why Alabama's farmers should support their election bids. Follow that up with a county Farmers Federation meeting the next night and I'll be about all meeting'ed-out for a while.

The highs and lows of basketball: As of this posting, my beloved Mississippi State University's women's basketball team is undefeated, ranked #2 in the country, closing in on a conference championship, and looking every bit a contender for a national championship. The men's team has rebounded from a slow Conference start and is finally showing some real hope for the future. My own kids' teams...well, that's a different story. Neither have won a game all year and they are about out of chances. Bring on baseball/softball season.

Alright folks, my stomach is telling me it's time to get up and throw some smoked venison sausage in the frying pan. Kudos if you made it this far, and I hope y'all have a "dairy" good weekend!